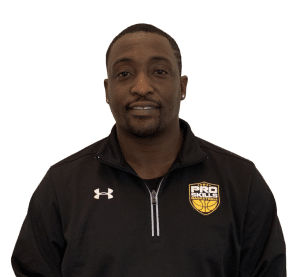 A native of High Point, Dumas excelled in basketball, football, soccer, and track at Andrews HS. After graduation, he attended North Carolina A&T State University where he was to be a member of the Aggie basketball team until his career was cut short by injury.

After graduating with a degree in exercise sports science, Dumas served as a senior lead director in the city of High Point Parks and Recreation Department from 2006-2015. In that role, he mentored inner city youth, performed volunteer work with the visually impaired residents of High Point, created programs for the youth as well as the adult population, served as a venue manager of cycling with Special Olympics of North Carolina, as well as the head of the annual midnight basketball program for inner city youth.

In 2011, Coach Dumas joined the coaching staff at Calvary Baptist Day School as an assistant boys varsity coach. In 2014, he became the boys junior varsity head coach while still maintaining coaching duties with the varsity program.

In 2012, Coach Dumas became the head coach of the Men’s 17U Triad Defenders Basketball Organization. After one year as head coach, he led the team to a second-place finish in the North Carolina USSSA state championship. In 2015 and 2016 Coach Dumas’ team won the NC State USSSA 17U championship and finished second again in 2017.

In the spring of 2019 Dumas accepted the Men’s versity head coach position at T. W. Andrews located in High Point NC. This is special to him because he is an Alumnus of the high school. He also teaches sports medicine and advanced physical fitness.

He and his wife now reside in Greensboro with their one year old son.