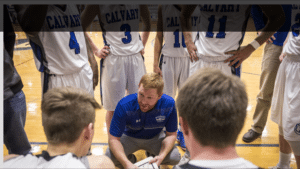 Joe Rybak attended high school in Pennsylvania where he was a four-year starter. He scored 1,662 points in HS career and led his team to two state appearances, a runner-up and third place finish, and was voted first team all-state both years.

Joe then went on to attend college at Tennessee Temple University where he was a member of the basketball program for four years. He was named Most Improved Player his first year at Temple and red-shirted for the 2003 NCCAA Division I National Championship team.

He also served as student assistant coach while at Temple. He graduated from Temple in 2005 with his B.S. in Liberal Arts and with minors in Bible, Physical Education and Coaching.

In 2008 Coach Rybak became the head basketball coach and assistant athletic director at Calvary Day School. In his 10 years coaching at Calvary, he has led his team to eight state appearances, and in 2013, to the final four of the 2A State Tournament. In the last two years, Calvary has finished runner-up in conference play.

Coach Rybak also served as head coach for the NC Spartans Elite 17U team for five years and was the founder and director of the AAU organization, The Triad Defenders, which he ran for 6 years.

In 2017, Rybak earned his master’s degree in Sports Management from The United States Sports Academy. He is a member of the National Association of Basketball Coaches and is certified with the NCAA.